Have I ever told you that pen wasn't my favorite medium?

Trying to get back into drawing. "Trying?" I hear you ask? Yeah. My life has been a tapestry of intermittent passions. For these past several weeks it's been Algebra and Chess, but I believe thread's running out on these for the moment. I'd like to restring it with some art--at least enough to finish off this book. I already have three books stacked on my desk waiting to be read, with several more on my shelf waiting. Eh.

Exercise 25: Back to the Model
Sit with your back to the model during a half-hour pose. Look around at the model as much as you want to and draw just as usual, but don't move your chair. You will find it such a strain to turn around that you will look at the model as seldom as possible, and when you look you will really look. 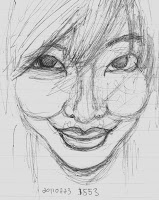 I really don't know if I'd have done any better not craning my neck around for every peek. Not quite the spitting image of this exquisite girl, but I did spend more than the thirty minutes allotted me--which obviously wasn't hard to do. 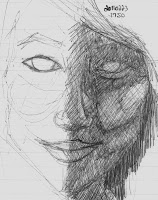 "That doesn't look at all like me," says Swei. Nope, no it doesn't, Swei. But I was looking at a picture of you while I was drawing it, letting my eyes rub all up and down it. "So why did you only draw half of it?" she askes. Less than that, even. Mostly because the other side got wrong real quick, so I decided to focus my efforts on the better part for the time that I had. Oh, and "asks" doesn't have an 'e' in it.

Actually, I think I'm going to start naming all these people. Whether they take offense at my learning or not is up to them. That I didn't ask any permission or even give a head's up is besides the point. The first model was Debbie Ong, the second Suet Wei. Yes, Swei, I finally did one of you. I'm not satisfied with it, though; so it probably won't be the last. Rar.

Ever look at a word really long, knowing full well that something was wrong with it, but just not coming to the conclusion of what specifically? "Obviosly" was my word, today.
Posted by Joshua at 18:22 2 comments:
Labels: drawing
Newer Posts Older Posts Home
Subscribe to: Posts (Atom)