"Welcome back," says the man to himself.

After a year hiatus, I decided to pick the book up, again. I was debating whether to start over again or continue where I had left off. I decided to go with the latter because I figured that I had better odds of actually completing the book that way.

Schedule 11 is the study of drapery--something that had always eluded me. Actually, I don't believe I can say with confidence that I've arrested well any of the studies, yet. Anyway...

My studies are a hybrid of the two Kimon suggested: the quick study, and the long study. I'd like to spend more than ten minutes a piece on each drawing, but I don't have anywhere to hang a drapery undisturbed for several days (neither do I want to look at the same piece of fabric in the same position for that long). So, I spent around thirty minutes with each drawing. I think. 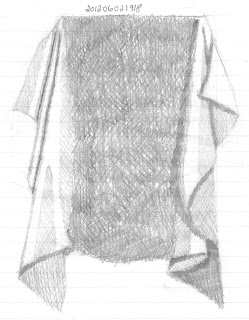 Kimon said that I should observe the drapery as having four unique structures: a top, sides, a base, and a "undercut"--where the drapery folds under itself. Along with these structures, four colors are attributed: white, light gray, dark gray, and black. Only with the undercut is shading allowed. I was having some difficulty defining each of the structures, and so I figured I'd move on to another drapery. 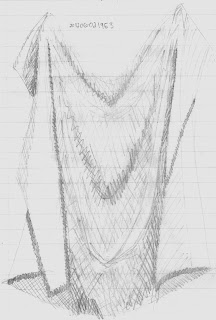 I feel the first one came out better. I was getting a little frustrated at this point. I felt that maybe I was trying to draw too much, and I decided to start over, focusing just on the center folds. 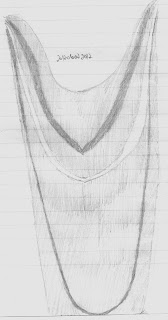 But in all honesty, I think that that idea proved the worst. I imagine (hope) that the mild mental struggle is opening up my understanding of drapery and that I'll do better with the next ones, because there really is something quite attractive about drapery.
Posted by Unknown at 13:49
Labels: drawing