Focus on the face.

Seems the next three schedules all require face study in the exercise. Which is fine with me, since it's something I've had little practice with (even avoided doing when I was younger). Kimon says:

"Don't think of the head or the face as something different from any other part of the body. Draw it as you would draw a hand or an elbow or a knee."

Sounds theoretically sound, so I'll go with it.

Gestures of the face. 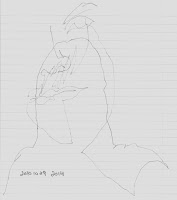 Quick contours of the face. That first one's kind of having an out-of-body experience. I kind of like it though. The second (and third) one is also pretty amusing. Amusing also, because it is the same girl from two different pictures. You see, where, arguably, her right eye is supposed to be, I contoured her face, first. Seeing I had plenty of room (it was a small picture), I decided to just move over a little. And now it kind of looks like I did it on purpose. 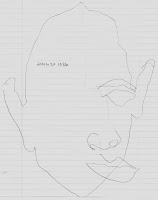 Contour of a face. Really. When I look down and see it's that out of whack, I don't have the strongest desire to complete it. Funny how taking longer doesn't seem to make it better.

Yeah, right. I shall continue this long study, but on a different sheet of paper.
Posted by Unknown at 19:46
Labels: drawing