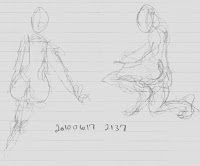 One less than usual for the memory exercise, today. Didn't remember the last pose. But these were, honestly, the best ones I did, so they're here for show.

I was going to use myself for the gestures, today, but the batteries in mom's camera went kaput, so they're recharging. Posemaniacs, one two three! Posemaniacs, four five six! 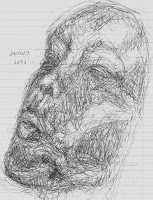 Was told to do the modeled exercises in ball-point pen. Cool, cool. I was also told to Press hard, even if the pen tears into the paper. Oops. I didn't do this guy justice. He's a rather handsome dude in actuality. And I butchered the poor woman's face. She is much prettier in the picture I swiped off of Myspace.
Posted by Unknown at 22:50
Labels: drawing