I didn't draw it. I thought it was pretty spooky though, so I thought I'd share it. It was drawn by a dude named Bob Tilton in his book, Drawing and Painting Animals. Mom gave the book to me on, I think, my eleventh Christmas. The night before last was the first day that I had actually read all the way through it.

Yes, my training has much abated recently. Having many interests makes honing any particular one of them quite difficult--at least, that's been my experience. However, since Kimon said that the Daily Composition is the most important exercise, I did manage to make myself do a few of these during the intermission. 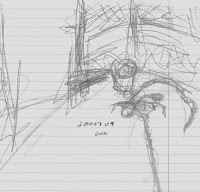 My sister's bird shed. I was getting a wayward snake out of it for her. About five feet long. Don't have a clue what kind of snake it was. I didn't hurt it, though. 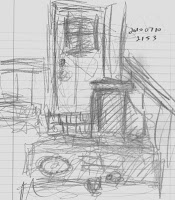 The recreation room. I was running on the treadmill. There's a television facing sideways between the door and the machine, but I wasn't watching it (obviously, since it was sideways).

The back patio. The younger geese had jumped the low fence and were insulting the cat. The cat didn't much care. 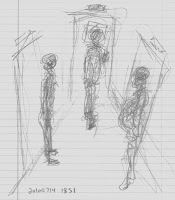 A hallway in the Orangeburg Triumph Fabrications building. I was there for a job interview, following Wes to his office. 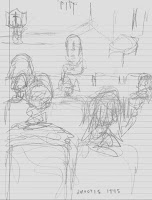 Bethel sanctuary. There for a vacation Bible school meeting. Dad and mom are directly in front of me. Megan, the organizer, is in the front. She's pretty hot--not that you (or I, looking at this drawing) can tell. 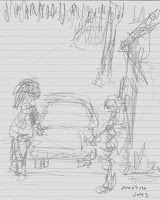 The back of my dad's shop. Dad and Cory were talking in the dusk. 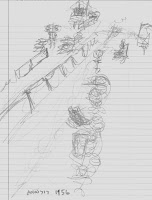 The Bowmen drag strip. Steve Bolen was in front of me eating his just purchased chili dog and soda. Two cars were actually staging at the same time--a rarity for Bowman. 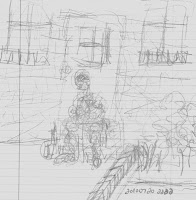 The back patio. Dad was sitting on the doorsteps just before lunch, tired.

Bethel staircase. Alan was helping me tote a desk to the van that Joey (the pastor) had just given to my mom. 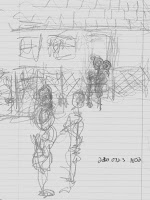 The back of some guy's house in Orangeburg. Went with dad on a very long junkyard trip with some customers/friends (Cory, Trae, Lo, Tori). Ending up picking up an (junk) engine back in Orangeburg. New dude was talking to Trae. Dude's three girls're (only one was his, the one by the door with the exceptionally large baby doll) in the background. 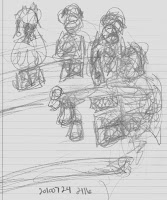 Bethel fellowship hall. Larry Kreider was teaching at a mens' meeting. From left: Billy, Joey, dad, Larry (there were more of us). Larry had three polystyrene cups in front of him, trying to explain finances.
Posted by Unknown at 19:41
Labels: drawing