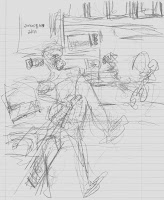 The DC. My sister and I cornered our friend Jason--who's very ticklish--in the kitchen and proceeded to attack him. That's him on the counter knocking things over attempting to defend himself.
Posted by Joshua at 22:32
Labels: drawing