"When the page turns too slowly, Cheat Engine."

Took myself a week reprieve. Felt good. Didn't study, didn't draw, didn't work out. Played (and beat) some video games. Because I could.

Funny, I just looked up reprieve to find out exactly what it meant. "To delay the impending punishment or sentence of." While funny, it's not quite accurate. I thought I was being clever. Oh well. It should read, "Took myself a week break." Rest doesn't quite work, even though it does.

Gesture exercise from seven days ago. That's as far as I got, that day. Plus a few more, today. They're gestures, what more can I say. Nick said to pick out the "good ones". Granted, there are several singles that I tend to like better on a given page, but they're mixed in with ones that I find to be the least skillful. So, I've been grabbing what I consider an average of the day's work. You know, just FYI and all that. 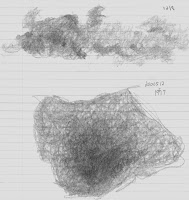 Got some exciting weight exercises, today. Nick said to alternate between drawing clouds and rocks. I know, right? Ultra stimulation. Trying to put my head around it. I know clouds look fluffy, but has anyone ever stood underneath rain? All that was momentarily floating around hundreds of feet in the air in the form of a cloud. I've thrown around a lot of rocks--even heavy rocks--but never a cloud. I intended to contrast, say, a ballerina and another body builder, but I'm trying to follow the instructions of this book to the best of my understanding.

Thinking about *understanding*... In the couple sentences before that, he was contrasting weight with volume, giving the example between a glass tube and a 1/2"d lead pipe--same space, different weight. Which sounds a lot like density, to me. What I'm getting at is "the best of my" part, though. That rock took up a lot less space than that cloud. So I probably didn't quite accomplish what I should have. Even though I was thinking about density when I was doing weight. Do bi do bi do biiii...
Posted by Joshua at 20:15
Labels: drawing