Oh, my love, my darling
I've hungered for your *touch*
A long, lonely time

Welcome back, ladies and gentlemen, to another exciting day of learning to draw the natural way. Has he gotten any better? Let's see what fourteen hours of sleep can do for a man! (I did not sleep for fourteen hours.)

"Probably you realize already that contour drawing is of the type which is to be done 'painstakingly.'"

"On the other hand, gesture drawing, which you will begin today, is to be done 'furiously.'" 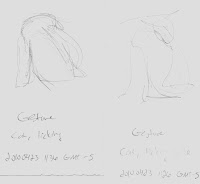 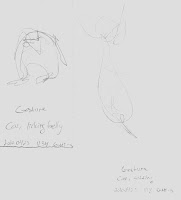 Which is nice. Something like a gesture a minute. I like that pace. Given so many pictures, I had to pick out the *good* ones, though. The cat was my model for thirty minutes. Thirty minutes but not one "Cat, licking butt" pose. I was really looking forward to that one. She does this thing where she sticks her leg straight into the air like some kind of ballerina. I could probably frame a house with that pose. But she was a no show, today. 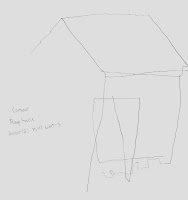 Back to contour. This exercise, as well as the first, was outside today. It's the water pump house in our back yard. Weee. I waited a few hours after the gesture drawings so, you know, that practice wouldn't interfere with this one. Good thing. 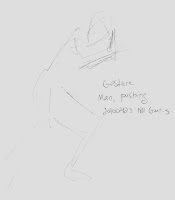 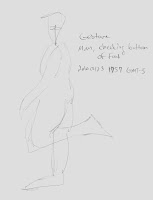 Seeing that not a whole lot's moving around the house, and my sister's birds decided to stay in the shed this gorgeous day, and "Tree, standing" was, I considered, not worthy of being called a gesture (today), I took a movie of me doing silly poses. Work with what you've got, Joshua. Work it! Work it, baby! You sexy thing! 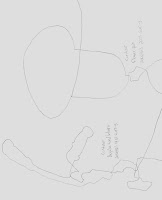 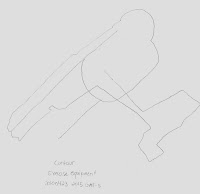 And another round of contour. Really...how is it that my skill got worse? And I know I'm not taking as long as he suggested, either. This was supposed to be an hour of drawing with 1-2 contour exercises. One to two, meaning that one should take more than thirty minutes. As you can see, there was ten minutes between the...handlebars and the...flower pot. Realizing this, I took another effort, a little radical. I closed my right eye, thinking perhaps my binoculars were causing some confusion, and contour-ed the leg attachment for the old Bowflex. Not that you can tell. Dad bought that thing (the Bowflex) back in 2002, or so. All four of us have used it, barely. Of us, I've used it the most. My opinion is that...well...I like free weights better.

I found this bit humorous:

"In general, do not start with the head. Offhand, the only times I can think of when the head would be the natural place for an action would be when a man is standing on his head or hanging on the gallows."

Well, at least I've always done something right. But, that's because I've always sucked with faces.

"There are many things in life that you cannot get by a brutal approach. You must invite them."

Thanks, bub. Ain't that the truth. And I thought this was an art class.
Posted by Joshua at 21:22
Labels: drawing