Since I've started this book, I've started sharpening my pencil with a metal file. Frankly, I quite like it. I sharpen it on six sides to give it this hexagon shape. I particularly like the hexagon.

I figure I'll let you guys in on the specifics of the schedules this guy's laid out, that is, at least 1B-1D:

Honestly, I've been following it pretty well. Well, except I drop the middle gesture exercise and take breaks between each exercise. Except my breaks are actually studying Japanese. Gotta keep the learning juices flowing, you know. Honestly, this is the most studious I've ever been. Up to high school, I didn't study at all, did all my homework in class, and got straight A's. 4.0 GPA (Actually 11.0, they didn't use the 4.0 grading scale in Missouri.) In high school, I still didn't study, I did 3/4 of my homework at home, and started getting B's. Graduated with a 3.87 GPA, I think. In college, I studied, did all my homework at home, and started getting C's (and even a D [Calculus]). Dropped just below a 3.0 GPA. But now...I don't go to school and learn everything at home... Not quite sure how that figures, yet. 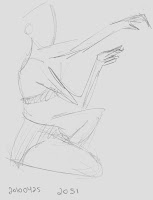 I decided to lump both the gesture exercises together (same with the contour). Besides, all of them were based off the Google image search "people in park". I started with "people at beach", but there was too much skin and art was starting to stray out of focus, so I had to quickly change gears. And the umpire says, "Safe!" Honestly, the people in the park were more animated than the people at the beach. The latter were like of bunch of sea lions. I never saw the attraction of laying down in a broiler. And I'd rather swim in fresh water than salt.

You know, the dude made some arbitrary distinction between a gesture and a sketch; I wonder which one I'm doing. Said it needed to say something about the whole form within the first ten seconds, and I accomplish that...

I did these with one stroke--that is, I never pulled my pencil from the paper (or looked at the paper until it was finished). When I did the previous ones, I stopped at points to move the pencil to a new place and became discouraged seeing how bad it was. This way, at least it's a solid mess instead of many messes.

And yes, that was my third attempt at the toilet. If a guy can't hit a toilet right, what kind of aspiring artist is he? I think it's the long, cold lines that's getting me. You know, like walking in the desert and how everything starts looking the same. "Wasn't I just there?" So my eye balls jump forward. "Oops, I think I went too fast." So my eyes go back a bit. However, I am more satisfied with this toilet that the last two. Serious.
Posted by Unknown at 22:32
Labels: drawing