When I was much younger, I used to draw very darkly with my pencil, used to cram the lead right in to the paper, which made it quite difficult to erase properly. Slowly but surely, by the time I was younger, I started to draw quite lightly, only darkening in what I considered to be a good enough final product, which really saved on erasers. Now, I'm having to draw heavy again in order for it to show up on my scanner. Not that that's a real problem, though. Kimon said not to even use an eraser until Exercise 28. I'm at 4.

"This thing we call gesture is as separate from the substance through which it acts as the wind is from the tress that it bends." 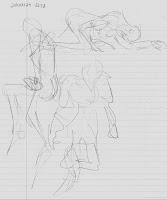 Mmm. College rule. I wanted to stop wasting the more expensive computer paper on gestures. I have loads of loose leaf paper that I no longer have immediate use for and it's a lot cheaper. Well...it *was* a lot cheaper. Some of this stuff is even yellow I've had it so long.

Cross contour of an arm. Contour of...well, I did do a pair of crossed legs, but it was crappier than normal (no kidding), so it's a no show. And I keep running out of paper. That is, to draw on. That is, the paper itself is lacking surface area sufficient for my practicing. It just doesn't feel free enough practicing contour and trying to keep it in a box.

Ouch! I probably haven't stabbed myself with a pencil in five years. Welcome back, Josh.
Posted by Joshua at 23:03
Labels: drawing