Helped some friends set a deck today. Ate a very nice (and very large) breakfast, there. Played some Rampart (finally found someone else that enjoys that game--props to you, Jacques-man; yes, the swelling did go down in my finger). Got back home around two. Which left me doing art at (glances at clock) five. Seeing I'm already typing on the computer, I'm going to look into my big ol' bag of pictures for the gesture (and likely, contour) exercises. 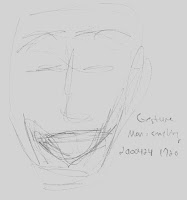 Ever have one of those moments where you go "Oh!" because you've finally realized something that had been happening for a while or, perhaps, realized what you had just (as in, just four days ago) seen? I have them all the time. Recently (a few seconds ago), even. I had this music (Mother) playing while doing the aforementioned gesture practice. Fifteen gestures later, I realized that the song hadn't changed. Particularly notable because the song is about a minute long. I had checked the "play indefinitely" box on the NotSo Fatso NSF plugin for Winamp when I was using it the other day. Funny, too, because when I was closing the program the other day, I distinctly remembered that I'd probably forget to uncheck it when I started it up again. Viola. As far as gestures, though, nothing new to report. Well, except that I went with some facial gestures this time. That, and either I draw too lightly or I haven't figured out how to use my scanner.

Back in seventh grade, at the ripe age of twelve, I attended Mr. Mack's art class in our public school. It was easily my favorite class. I liked band, and Mr. Bales was easily as superb a teacher, but the trumpet ended up being not as enjoyable as I had expected it to be; no less my best friend Derrick decided to switch from trumpet to baritone and was moved several seats away from me. Mr. Mack's (his real name was Roger MacHaren, or something) class had this...ease to it. We had our projects, and our deadlines, and boy did he get anxious when school plays were coming up, but it was...easy. The only--only--hard time I had in that class was the toothpick project. It was something I had looked forward to. In previous years, I saw kids come out with boats and rollercoasters and all kinds of cool crap. But Mr. Mack liked to vary things a bit, keep things fresh. During my year, during the toothpicks, our job was to make a mobile. Okay. No big deal. Out of "abstract 3D shapes". My understanding flatlined. Three days passed, and as every other kid was gluing away and making a mess, I managed to make one meager, very pathetic "abstract 3D shape". And I cried, right in front of everybody, so damn frustrated at not being able to *not think*. Mr. Mack, being the cool dude he was, just for me alone, let me make a mobile of weapons. Weapons are what I loved, and he well knew that. I finished the project in a couple days.

And so we come back to contour. Thankfully, I've doubled my years since then, and I will mount up against this foe with head held high. It's just a good thing you can't see my eyes.

For your information, that was my second attempt at the toilet. 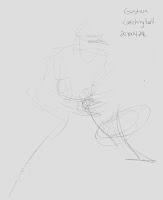 As a humorous note, I decided to search Google images for more gestures. A baseball batter was the first thing that came to mind. So, I typed "batter" into the search bar. Out of eighteen pictures, four were what I was looking for (only one good one); one had to do with laying foundation. The other thirteen? Didn't even cross my mind until I saw them. Food. Mostly, pancake batter. Before I typed pitcher, I realized what I was getting into. Not entirely, though. There's something incredibly attractive about the woman in this picture. I generally find tattoos quite undesirable...but war paint's a different story. And the way her hair goes all *woosh*. And the double barreled shooter.

It actually took me thirty minutes to draw this. As a picture, it is a complete failure. I assure you that my friend is not radically deformed like that, with one skinny arm, and one fat arm. However, as practice, it was a perfect exercise. This is the most accomplished I've felt doing contour, yet. Then again, maybe there's something more to it than contour. Like tracing the form of a lovely girl with my eyes. For thirty minutes.
Posted by Joshua at 23:08
Labels: drawing